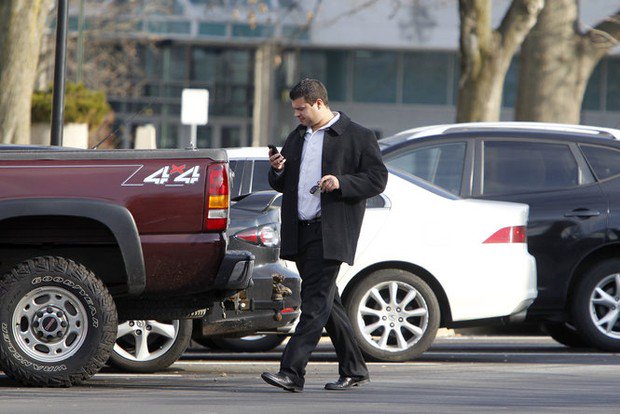 The title said it all in this tweet from a New Jersey company-“City narrows roads because you won’t stop texting while walking”. But um, no, the correct reframe is “city narrows crossing distance at intersection to make pedestrians safer”.

And this whole thing about pedestrians being hit by vehicles because they are looking at their cell phones is just a bit odd. It is drivers of vehicles  that hit, maim and kill pedestrians. And what are the three main reasons that pedestrians are killed by drivers? Speed, drugs/alcohol, and distraction.

In the United States pedestrian mortalities have increased over the last thirty years and there has not been a major campaign to change driver behaviour or awareness of the vulnerability of active transportation users. As Ms. Walker observes ” compelling new research reveals that pedestrians probably aren’t texting themselves to death. While the term “distracted walking” has become a way to pin the blame on pedestrians for supposedly looking at their devices instead of the sidewalk, there hasn’t been much evidence provided to prove smartphone-using walkers are at fault when collisions occur. In fact, most states don’t even include pedestrian behavior as a factor in crash reports.”

By examining the use of crosswalks in New York City and Flagstaff Arizona, engineering professors at Northern Arizona University looked at 3,038 individuals crossing. And of those in the study, 86.5 per cent did not show any distracted type of behaviour. The study also found that most pedestrians walk within the demarcated pedestrian crossing lines, with ony 16 per cent walking outside them.

“Among all demographic groups, men were most likely to commit violations while walking. People using phones were slightly more likely to travel outside the crosswalk, but not more likely to cross against the “Walk” signal.”

And what about driver distraction? The Centre for Disease Control has a study showing that 31 per cent of American drivers said they had texted while driving in the last 30 days. Texting while driving has been compared to driving while impaired because of the distraction.

Educating pedestrians or in the case of Honolulu fining a pedestrian for even looking at a cell phone while crossing a street is not what is necessary to make streets safer. Driver distraction needs to be criminalized, not pedestrian use of crosswalks.

being successfully  used in New York City. For a nominal cost per intersection (about $1,200) crossing lights are reprogrammed to give pedestrians a seven to ten second start to crossing the road before car traffic is allowed to proceed through the crosswalk. The use of 104 of these “leading pedestrian intervals” in New York City resulted in a 40 per cent decline in pedestrian and cyclist  injuries and a decline in deaths. To be serious about encouraging walkability and pedestrian safety it is time to seriously consider  “policies that prioritize walkers over cars.”

Here is the YouTube video of  how the Leading Pedestrian Interval works.