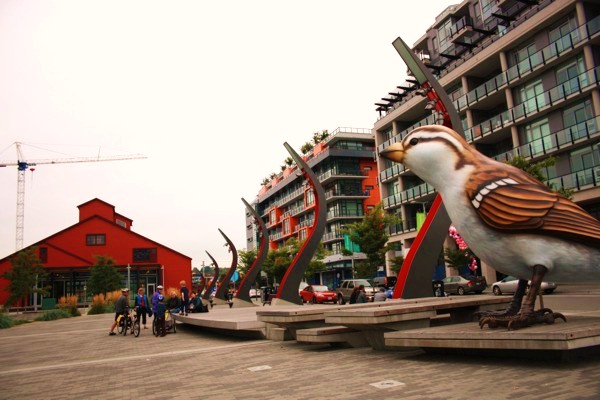 In designing streets for all users and throating down vehicular traffic people often ask if emergency vehicles and fire trucks can navigate the newly designed spaces easily and quickly. There are approved geometric design guides, as well as software programs to ensure that these vehicles can manoeuvre more constricted spaces easily. And now all fire trucks don’t need to be built to the old specifications either. This story from Streetsblog describes Fire Engine 13 in San Francisco’s Financial District that is “narrower, not as long, and has a better turning radius,” said San Francisco Fire Department Chief Joanne Hayes-White. “It’s a beautiful piece of equipment.”

Eight new fire engines in San Francisco are ten inches shorter than the standard older trucks and can make a u-turn in 25 feet. The shorter design enables the engine to manoeuver San Francisco’s curving streets. The engines also include on board cameras to give a full 360 degree view around the engine, enhancing safety for cyclists and pedestrians, following the Vision Zero edict every life is precious.

All eight of the new engines are expected to be in service in December. The new fire engine is actually in response to City Hall Supervisor Scott Weiner requesting that the trucks  be designed to fit the city, instead of the city streets being designed to fit a certain size of fire truck. Both Walk San Francisco and the San Francisco Bicycle Coalition collaborated on the design.

Each engine cost over $500,000  American dollars and are anticipated to run for 15 years. The engines will go to “stations that respond to calls in the densest areas of the city, with the most alleys and narrow streets, such as Chinatown and the Financial District.”

San Francisco is also looking at replacing their aerial ladder trucks with a design that can work over parking protected bike lanes and other street amenities. Sometimes it is just better to change the size of the service vehicle providing much-needed emergency services than to overbuild streets for the infrequent emergency event.