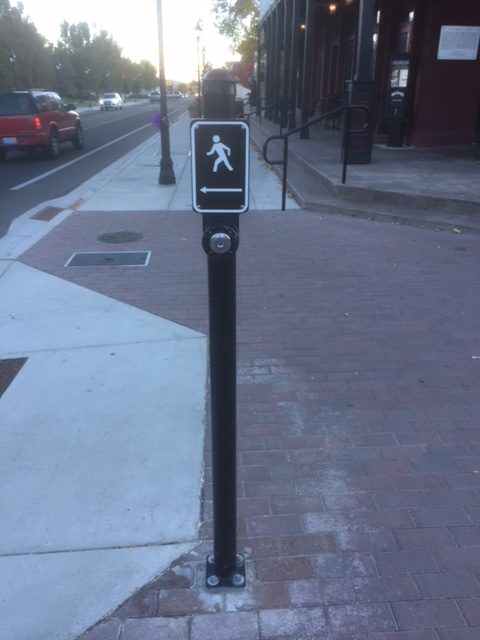 Walk Metro Vancouver has reported on a phenomenon that is occurring in many towns that are reclaiming their historic downtowns back from thoroughfare highway use to more pedestrian friendly sidewalks, bike lanes, and slower vehicular flows more attractive for locals.

Carson City Nevada is 30 miles south of Reno, has a population of 55,300 (2010) and is also the state capitol of Nevada. Despite a downtown that contained a lot of important heritage buildings as well as the grounds for the state capitol, motordom reigned supreme on the main street. Four lanes of traffic went through Carson Street at speed, and pedestrians were hurt and killed trying to cross the street. At one point the City installed fence barriers along the narrow sidewalk to try to separate pedestrians from vehicles. It did not make for an inviting experience on this main commercial street.

With the use of a 1/8 per cent  local sales tax, the City was able to issue bonds to pay for a revamping of their downtown corridor. Utilities were replaced under the road surface, and the street made more walkable and visually interesting by the use of  new wide non glare sidewalks, plantings, dropped curbs, pedestrian activated crossings, bike lanes, and attention to detail in textures and materials.

Opened in the Fall of 2016, Walk Metro Vancouver visited the street  to see how the street was functioning, and whether the improvements were a success. Mayor Bob Crowell noted that there had been no pedestrian accidents on the street since the new street treatment had been installed. The new street is designed to maintain cars travelling at the posted speed and no faster. There are quick activation pedestrian crossings throughout the downtown. The design and development of a plaza on a previously opened street has a stage and a kid friendly splash pad, and has small local businesses and outside seating areas for people to linger.

But most importantly,  “early adapter” businesses that focus on all segments of the local population have opened, most notably “Scoups Ice Cream and Soup Bar with engaging staff, a plethora of ice cream flavours, and a ready-made place for kids of all ages to hangout and reflect in the adjoining plaza. As several teenagers admitted, there was no reason to come to the main street of Carson City before, as there was nothing of interest. Now with an  ice cream and soup bar and open seating outside the store, teenagers feel comfortable and have a sense of belonging in the plaza. That is what successful placemaking is all about.

It is no surprise that many locals now are using the downtown Carson Street in a different way, as a place to walk to and to linger. As well new eateries have opened, including The Union which is always busy and attracts hungry visitors from Reno.
Carson City now has a “there there” in their downtown, and is experiencing a renewed interest in its downtown commercial area. The city has a strong arts focus and now has a downtown that is accessible and attractive to pedestrian and bicycle users. Buildings along Carson Street are being renovated, and a new mixed use building with rental apartments on the top floor is being built on a sidestreet. Carson City’s decision to shelve motordom and to enhance local shopping by bike and by foot is already reaping early returns.