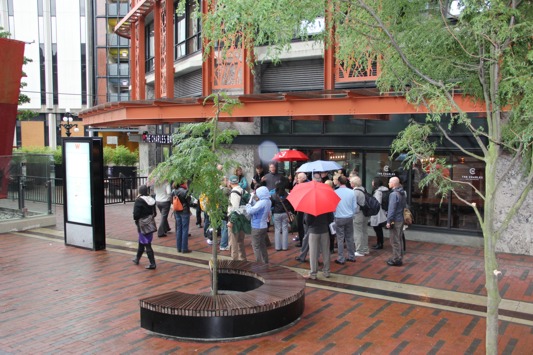 As reported in the British Telegraph, Motordom’s last gasp is alive and well with a science reporter letting us know that removing speed bumps (called speed humps in Britain)  on the road will lessen pollution and save lives. I am not making this stuff up.

“In a report looking at how to make air cleaner, the National Institute for Health and Care Excellence (Nice), said that measures which help motorists stay at a constant speed, rather than accelerating and decelerating, were preferable to humps. It follows a study earlier this year by Imperial College which found that forcing drivers to slow down and speed up again produces significant harmful emissions”

But that is not really what the NICE link says when you click on it. It says if you slow down and drive smoothly, you will reduce pollution. The Imperial College report goes on more of a tangent, stating “road humps should be removed from streets close to schools and playgrounds because they increase the amount of pollution from cars, experts have said. Scientists have found that by forcing drivers to slow down before speeding up again, road humps cause vehicles to produce a greater amount of harmful emissions” And yes, they have made the link that speed humps impact air quality where “large numbers of children gather, such as outside schools or play areas”. There is no discussion that the speed humps are placed outside schools and play areas to slow vehicles and protect children.

What of the lives saved and reduced injuries from speed hump slower speeds? We know that a child or adult being hit by a vehicle at 50 km/h has a 10 per cent of survival. That increases to a 90 per cent survival rate if the vehicular speed is reduced to 30 km/h. Speed humps or bumps reduce vehicular speeds and increase the likelihood of pedestrian survival in crashes. At the C40 Cities Summit in Mexico City incoming chair Mayor of Paris Anne Hildalgo has just announced that  the use of diesel vehicles will be prohibited  in four major C40 cities by 2025. Emissions can be reduced by the use of electric vehicles.

It is hard to believe in the 21st century that this vitriol for motordom supremacy is still being published by newspapers. There is a national movement started in Toronto to start calling crippling and deadly vehicular/pedestrian crashes “road violence”, a term that was first used in the early 20th century. Slower speeds save lives. Speed humps or bumps slow cars. Until we have better driver behaviour and streets designed for slower speeds, we need humps.