There is an exhibition currently touring from the Smithsonian titled “Patios, Pools and the Invention of the Backyard”.  Jak King has been circulating  a write-up by the Smithsonian insider which not only describes how North American culture turned from a front porch to  a “back yard” life, but also points out that this love of lawn and yard is a recent post-war development.  Noted Vancouver  artist and author Michael Klucknerobserves that this exhibition adds another dimension on how conformity and consumerism were sold to a postwar society that had been under tremendous stress in the previous generation.

There were several  post-war factors that contributed to back yard culture: instead of army life, there was a growth in white-collar jobs that were limited to 40 hours a week. There was an increase in disposable income, allowing people to personalize these innovative back yards as part of post-war suburban housing tracts. Materials that would have been used in wartime were also available, allowing home owners to personalize their backyards with swing sets and pools. 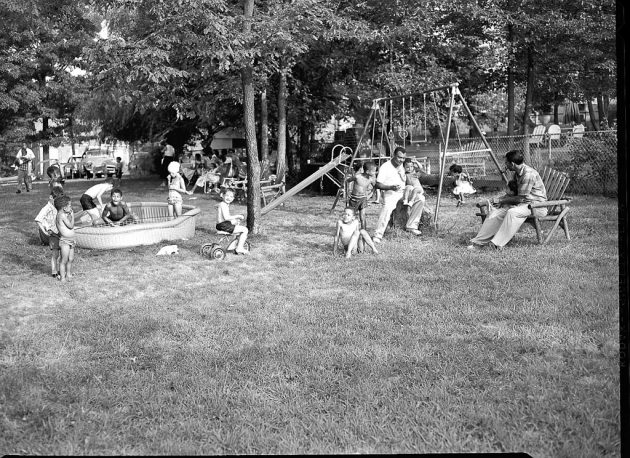 The Smithsonian exhibit describes the repurposing of aluminum, concrete and fabrics from war production to new post war uses. In David Suzuki’s Book “The Sacred Balance” he also describes how consumerism and home making became the new focus of war-time industries that needed to reboot for peaceful times. And the suburbs were perfect for in ground and above ground pools, using materials that would have been prohibitively expensive and scarce during the war.

Even suburban houses spoke to the birth of the back yard. Where previously a front porch or stoop graced the facade, new architecture stripped the facade of that adornment, meaning that socialization now happened by invitation in the private back yard, which formerly would have just had a vegetable garden and a garbage tip. 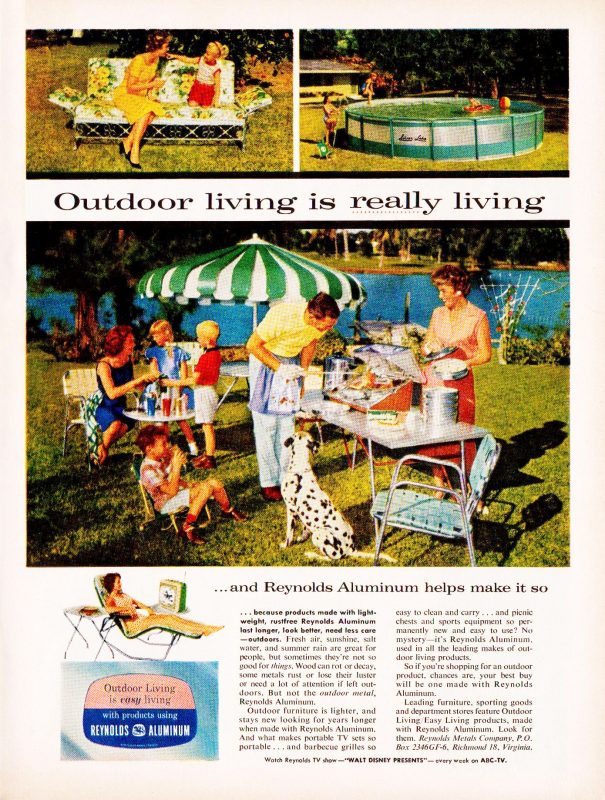 Industries quickly responded to the commercialization of house and yard, creating lawn grasses which of course needed to be nurtured with pesticides and herbicides, and demanded to be individually maintained with lawn mowers and garden tools. A whole new way of life morphed wartime businesses into servicing the new subdivisions and the invention of grassed back yards. Who you were was reflected in your yard maintenance~“A pristine lawn and patio showed that you had both free time and extra money to make that open space behind your house a private oasis.”

From YouTube, here’s a 1950’s barbecue in one of those prized back yards, “where the family circle invites a few special friends for a barbecue, that holds a charm like few others in the world”.