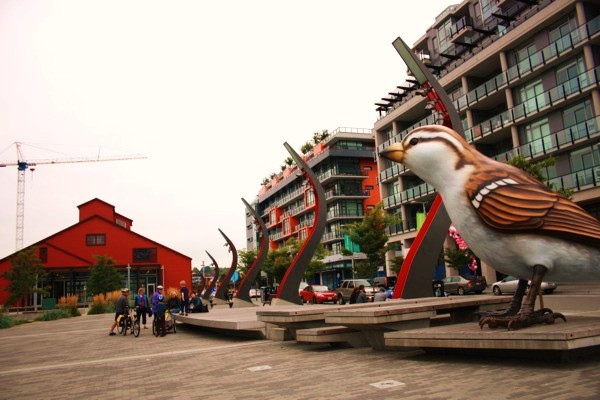 Kudos to Pat Doherty and her blog The Walking Commuter, in which she describes her walking route to work, and her commuting practice, which she started during a Toronto Transit strike a few decades ago.
In her blog, Pat asks a question that can also be asked in Vancouver: “Have you ever really needed to get to a bathroom while walking in Toronto – and not been able to find one? It seems to be a near-universal experience. But does it need to be? I think that the lack of public washrooms in Toronto discourages people from longer trips on foot that are not tied to shopping or eating out. Can’t we do something about it?”

Ms. Doherty observes that public washrooms in Toronto and other cities used to be common, and were built for public health reasons. Safety concerns regarding other activities people conducted in the bathrooms meant that facilities were eventually closed. She notes that Portland has PHLUSH (Public Hygiene Lets Us Stay Human), a non-profit organization which provides a public toilet “advisory toolkit” and maintains the philosophy that “toilet availability is a human right”.
There are campaigns in Winnipeg, Montreal and Yellowknife to increase public washrooms, based on the idea that the lack of these facilities impacts the most vulnerable, particularly pregnant women, young children, and the elderly.

Ms. Doherty is requesting Torontonians to tweet the mayor requesting public washrooms via Twitter, using the hashtag #publicwashrooms and the phrase “#Pedestrians NeedPitStops!”
Meanwhile, back in Vancouver, TransLink is saying that the issues of publicly available washrooms will be discussed. Surprisingly, they see this as a “hot button” issue, instead of a basic need that needs to be rectified for comfortable transit commuting. According to Kevin Desmond, CEO of TransLink, public washrooms have been paired with having pets on transit as a difficult issue: “We’re taking a close look at both”.

It’s been written  about the fact that TransLink is lagging on the issues of public washrooms. Senior citizens, community boards and disability groups have demanded for accommodation of this basic human need. On the entire TransLink system, public washrooms can only be found at SeaBus and on West Coast Express; all other washrooms on the system are solely for staff use.
Like the provision of free internet on TransLink and Coast Mountain buses, washrooms remain something that should be built in, not added on, to make public transit seamless and comfortable for all users.