Janette Sadik-Khan came to Vancouver on March 24 with  publicist Seth Solomonow to promote her new book “Streetfight”, a Handbook for an urban evolution. Janette is now working with  Bloomberg Associates and bringing her strong urban placemaking skills to cities around the world. http://www.jsadikkhan.com/streetfight-the-book.html

Sadik-Khan’s success in implementing new pedestrian spaces and installing protected bike lanes came about from her strategy of “trying things out”, doing demonstration projects in place on the streets, vowing to remove the projects if they were not successful. The projects were successful and they stayed.

With over 30,000 deaths in U.S.  car accidents a year on 2.5 million miles of road, Sadik-Khan states that this kind of carnage would not be acceptable in any other profession.  She describes the Manual on Uniform Traffic Control Devices as the “best clip art”. By using the devices contained in the manual,  Engineers stay within the established parameters for road building and for their profession.

I have written an article on Price Tags about this noting that transportation  engineers do not have to answer directly for crashes and  accidents due to their street design.  Staying with standardization there is no new  innovation that can be learned and designed for a specific space. As long as transportation engineers stay within accepted national standards, they cannot be directly sued. The article is here: https://pricetags.wordpress.com/2016/03/05/are-street-designers-the-volkswagen-brand/ 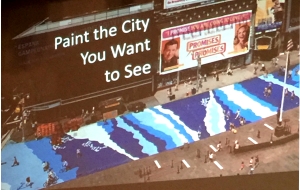 Sadik-Khan reimagined the city and her position, seeing herself as not the Commissioner of Traffic, but of Transportation, a much more holistic approach. She used road paint in DUMBO-(Down Under the Manhattan Bridge Overpass) to create a pedestrian plaza. People immediately used the space. With over 350,000 people using Times Square daily, Sadik-Khan did another pilot project, using street paint and folding beach chairs on a new pedestrian plaza space on the road surface. Sadik-Khan saw success of this temporary space when people talked about the beach chairs, and not the fact that the street was closed. The road paint to create plazas and the beach chairs can be replicated anywhere. The immediate impact in New York City was that sales in adjacent businesses increased 430 per cent with the redesign.

Using artwork and bench programs, and advocating for  Vision Zero in transportation related deaths  Sadik-Khan increased  and enhanced the public realm for pedestrians and bicyclists. The name of her book “Street Fight” comes from her wish to shake up the status quo and see the street differently, not only being space occupied by vehicles. Alan Jacobs the writer of “Great Streets”  also talks about the city streets as being the great place for innovation, as over thirty per cent of municipalities are roads, and these spaces can be redesigned to accommodate active transportation and pedestrians. https://mitpress.mit.edu/books/great-streets

I first heard Sadik-Khan speak in 2007 about her work in New York City and I was  working with her staff in New York City when the first bike lanes-which were painted a vibrant emerald green-were installed. It was a sublime moment, seeing bicyclists and pedestrians explore the newly created spaces, with bicyclists enjoying separated lanes away from car traffic. 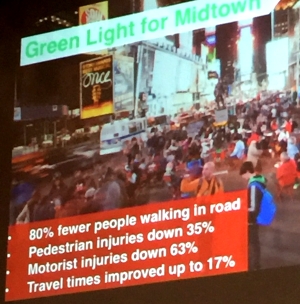 It is evident that Janette  Sadik-Khan now perceives that planning and engineering have crested the hill, and are now meshing towards inclusion of pedestrians and bicyclists in 21st century road space and facilities.

New York City has shown that creating more space for pedestrians and bicyclists does not lead to gridlock or disaster.  Creating demonstration projects to get neighbourhood buy-in is now an accepted practice, and Sadik-Khan has shown this can be achieved in the biggest urban centre, New York City.  Sadik-Khan states that it is important to demonstrate how a street can be used differently, test it, ensure that public space is sponsored for others to take care of it, and to look for ways to program it. She is a fan of Ciclovia, the South American Sunday  closures of streets for bicyclists.

It is not a matter of IF we should be reimagining our roads for all users but when.

It is the 21st century approach to how to keep our cities and citizens moving in a sustainable and prudent way.