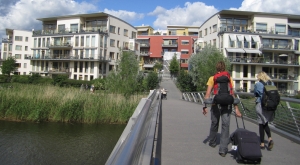 Last winter Walk Metro Vancouver was invited to be a plenary speaker at a pedestrian think tank and conference in Seoul Korea. One of the highlights was reviewing  Seoullo 17 with architectural planners from the Architectural Urban Research Institute.  This extraordinary Sky Garden was built upon the 1970 Seoul Station Highway Overpass in South Korea, which was going to be demolished because it was structurally unsafe.

The Seoul Station Overpass is one kilometer long and 17 meters (55 feet) above the ground, roughly the same height as Vancouver’s Georgia Viaducts. Instead of demolishing this overpass, it was seen as a catalyst for urban regeneration and linkages in an area that was previously disconnected for pedestrians.   In 2015 HRVDV won a competition to design a this 33 million dollar project as an arboretum which has 254 species of trees, rhododendrons, and plants (all labelled and in alphabetic order on the Sky Garden).  There are 24,085 trees planted and 645 large pots placed along the Sky Garden. There are baby trampolines (carefully constructed in conical forms), plant sculptures, a bakery, a library and even a nursery. The project opened in May 2017 and has been praised for its  adaptation of a motordom artifact.

There is great attention to detail in the finishings and the construction,  and the Sky Garden is bathed in blue light in the evenings. It is used by people of all ages for walking and for visiting, and is seen as an “observatory” over the different lanes of vehicular traffic below. One of the desired outcomes was for users to become more aware of the heavily used streets  and the glassed in guard rails  of the Sky Garden invite that conversation. There is also an “observatory” platform on the Sky Garden for a more bird’s eye view. The designers have playfully cut large diameter cores into the centre of the overpass and placed clear plexiglass covers over those holes so that pedestrians can view for themselves the “structural integrity” of the bridge’s inner workings.

View from Seoullo 17 of Traffic

Like the High Line the Sky Garden has been very popular with local citizens and the travelled width of the walkway is only fifteen feet, the same width as much of High Line in New York City. Adminstrators now say that they wish the pathway widths had been a bit wider, but no one anticipated the overwhelming use and acceptance of the space. Even the wayfinding and local maps  are  now designed with the Sky Garden being the central artery to scores of attractions, shops and services from the many entrances to the elevated walkway.  Seoullo 17 has quickly become a central part of Seoul’s revitalization and you can view more about the project’s background and opening day in this YouTube video.