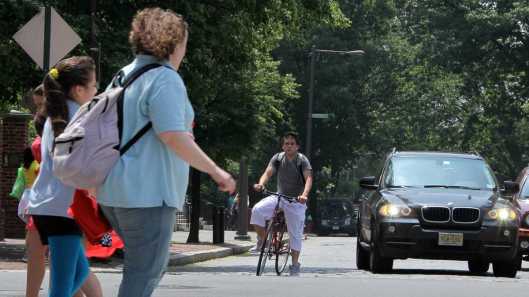 There has been press about the important ramifications of reducing vehicular speed in cities and places to 30 kilometers per hour (km/h)  from 50 km/h. Studies show that vulnerable road users-those folks biking or walking without the metal frame of a vehicle to protect them-can better survive car crashes at those speeds. Pedestrians and cyclists have a 10% risk of dying in a vehicle crash at 30 km/h. That risk increases to 80% being hit by a vehicle at 50 km/h.

Dr. Perry Kendall, British Columbia’s  Chief Medical Officer has released his  Annual Report entitled “Where the Rubber Meets the Road” which identifies motor vehicle collisions as a significant threat to the health of people in this province. Although the motor vehicle collision fatality rate has declined from 18.4 deaths per 100,000 population in 1996 to 6.2 deaths per 100,000 in 2012, British Columbia has a high rate of deaths, as well as a high rate of collisions causing serious injuries-444.5 major injuries per 100,000 population. That translates into 280 people being killed on roads annually, with another 79,000 seriously injured.

The Medical Health Officer’s report is comprehensive and points out the current challenges broken down by region. The report cites road design, distraction and speed as three major contributors that can be addressed, and recommended lowering speed limits to 30 km/h in cities. Not surprisingly, Minister of Transportation Todd Stone has put the kibosh on lower speed limits, citing that this was something  he has not heard about from local municipalities, and that such a change needed strong support. You would think when the Province is also paying for health care that they would be mindful on how to keep vulnerable road users as safe as possible with minimal investment. Slower road speeds in municipalities could prevent serious injuries and deaths to pedestrians and cyclists.