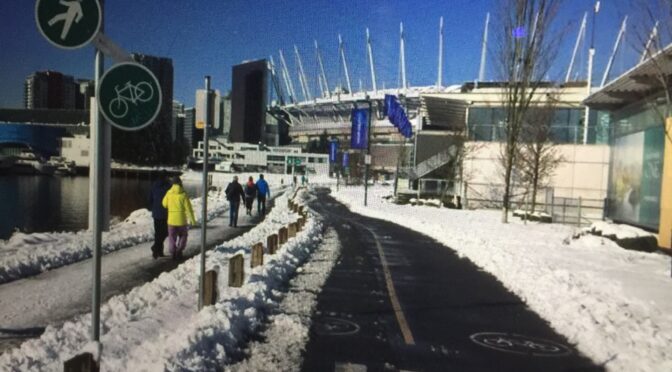 WHY DON’T WE CLEAN SIDEWALKS FOR PEDESTRIANS IN WINTER?

It seems strange that in a place that says in their Transportation Plan that  pedestrians and cyclists are the first priority  that we still have not become serious about ensuring that the most vulnerable road users  have clear, accessible sidewalks and bike lanes when it snows. From the perspective of anyone with a mobility deficit, in a wheelchair, or walking with a baby stroller unimpeded sidewalks cleared from snow just makes sense. Add in the fact that everyone should be shopping locally to support businesses hit by the pandemic.  So why are cities not providing this basic service, of ensuring cleared sidewalks for residents  to access local commercial areas?

In Vancouver? Nada. Vancouver makes it the responsibility of residents to clean the section of sidewalk in front of their house, and makes business owners responsible for the areas in front of their store fronts.  But the City of Vancouver does not respond equitably by  clearing their own snowy sidewalks adjacent to city parks and services, and pedestrian curb crossings can be treacherous. It just makes sense to snow plough out the corners where pedestrians cross, keep the snow out of bike lanes, and give Vancouverites a fighting chance when the snow falls, freezes, and stays.

It was balmy in Toronto last week, but the Toronto Star Editorial Board is not fooled and has bluntly  told the City of Toronto to start cleaning snow off sidewalks.

Just as in Vancouver, “Toronto leaves the responsibility for clearing sidewalks in the central core, the densest part of the city with the most pedestrians, to individual business owners and residents. Not surprisingly, they do a fairly haphazard job of it. And it’s pedestrians, including vulnerable seniors and those with disabilities, who face the dangerous consequences of that.”

With the pandemic curve not looking so positive, walking might be one of the few safe, open activities if there is another lockdown.

There’s statistics showing that in Toronto there were 3,000 complaints last year over snow covered sidewalks, 624 inspections and only 44 fines. The whole problem is that the complaints, inspections and fines still don’t produce what a city’s residents need~ clear, safe winter sidewalks.

There is specialized equipment for clearing sidewalks, and Ottawa and Montreal clean sidewalks, as well as Winnipeg. It’s no biggie. The estimated insurance cost of what the City of Toronto pays out annually for slips and falls on icy sidewalks is nearly seven million dollars, which you would think would be a major incentive for making sidewalk clearing a priority.

In Vancouver we only have to look back on February of 2018 when the snow came, stayed, and provided slippy boot punching snow on sidewalks throughout the city that remained grudgingly uncleared. The City has a Snow Angel Program that matched seniors and others looking to have their front sidewalk shovelled with someone that is willing to do that. But on a citywide basis in every commercial area and on the connecting streets we need the City to do the same service, providing snow removal on sidewalks so that everyone can have the chance to be mobile.  That’s how you give pedestrians and cyclists transportation priority all year around.

With over 460,000 views, here’s a YouTube  example of a snow removal machine made specifically for dealing with snow on sidewalks.